Placing the Public in Public Health – the project book!

By Hannah Kershaw in Blog, Blog Posts, Uncategorized | July 17, 2019 | Comments Off on Placing the Public in Public Health – the project book!

THE PROJECT BOOK IS OUT!

Placing the Public in Public Health in Post-War Britain, 1948–2012 is out and available in all good university bookshops, online, & to download Open-access.

The book, like many of the outputs produced by the Placing the Public team, was co-authored, with case studies and analysis provided by Alex Mold, Peder Clark, Gareth Millward & Daisy Payling. 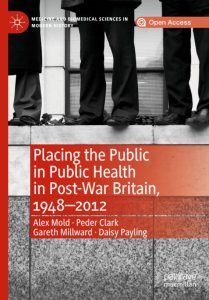 Divided into four succinct chapters (which can all be downloaded individually as needed), the book tackles some the key questions which our team has been pondering for a while, asking who and what the public in public health actually is. To get at some answers the book asks: What was the place of the public/publics in public health in post-war Britain? How did this change over time, and why does this matter? How were publics imagined and responded to by the state? What was the role of the public in safeguarding its own health, and what was that of the state or other actors? How did different publics respond to state public health efforts?

These questions are answered by drawing on the team’s historical research, which has examined the place of the public in public health in Britain from the establishment of the National Health Service in 1948 to the ‘return’ of public health services to local government in 2012.

The result is four chapters, The Public and Public Health, Imagining Publics, Speaking Back, and Changing Publicness. Drawing on a wide range of primary sources the chapters focus on the changing nature of health education; the public health survey; the response to heart disease; and the development of vaccination policy and practice. These examples were selected as they encompass the key technologies and techniques of public health practice and research, as well as some of the main challenges to population and individual health.

The book was published by Palgrave Macmillan as part of their Medicine and Biomedical Sciences in Modern History series, and is freely available open-access due to the generous support of the Wellcome Trust.