A Birthday Card Competition for the National Survey Health and Development

By Hannah Kershaw in Blog, Blog Posts | May 22, 2018 | Comments Off on A Birthday Card Competition for the National Survey Health and Development

The Medical Research Council’s National Survey of Health and Development (NSHD) is Britain’s longest running birth cohort study. It has been collecting information about the health and life circumstances of its study members since 1946. One of the ways the research team keep study members interested and participating each year, and make sure their contact details are up to date, is to send them an annual birthday card. They have done this since 1962, when the study members turned 16 and some of them left school and home, making them harder to keep track of. A large number of the cards are available in an online gallery.

This March, the NSHD study members turned 72 and the birthday card they received in the post was a little different. In the Autumn, Daisy Payling and Hannah Elizabeth from the Placing the Public team joined up with Maria Popham and Marcus Richards from the NSHD and Emily Tracy, an artist who specialises in participatory projects, to run card-making workshops in two London secondary schools. At the Greycoat Hospital School and Enfield County High School we spoke to students about the history and purpose of the cohort study, and used a questionnaire from 1961 to discuss gender in the 1960s and encourage students to think about what it would have been like to be part of a birth cohort study. We showed students past birthday cards and explored their role as objects of celebration and purpose. Following this, Emily taught the students about collage techniques, and the connotations that different images can have and the emotions they can evoke.

Armed with scissors, glue and an assortment of images and reprinted archive documents, the students got to work making their own birthday cards for the study members. 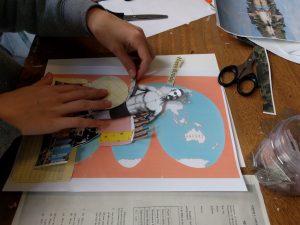 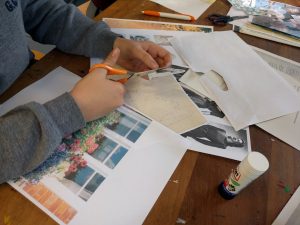 Students at both schools produced fantastic card designs, all of which can be viewed online. But the card sent out to study members could only feature two designs: one on the front and one on back of the card.

Researchers working on the NSHD met to discuss the designs and chose the two that would feature. The discussion was wide-ranging, focussing on colour, mood, health messaging, and everyone involved was very aware of how each card might be received. Listening to how the researchers make their choices really hammered home the care that goes into the NSHD’s communication with its study members.

In the end, two designs were chosen: one from each school. The designs were made into a birthday card and posted out to study members with an accompanying information update in the final week of February.

Here are the final designs: 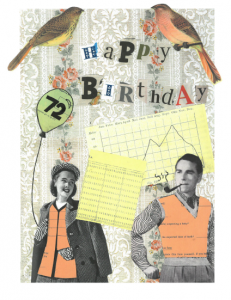 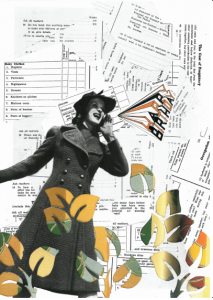 This project has been a pleasure to work on and we would like to thank everyone involved; Maria, Marcus, Emily, and the staff and students at Greycoat Hospital School and Enfield County High.

By Daisy Payling and Hannah Elizabeth